Samantha Ostman was born in Duluth, Minnesota. She was raised in Brainerd, MN, and later in Sioux Falls, South Dakota. She has been interested in art and music for as long as she remembers, and would draw with her younger sister on copy paper every day after school while their mother read to them. Charlie Bone, Spiderwick, Harry Potter. Her interest in art grew, and when it was eventually time to go off to college, Ostman decided she wanted to study to be a painter.

At the University of South Dakota, Ostman took painting classes under the tutelage of artists Klaire Pearson and Amber Hansen. Through the years her love of painting only grew, but it took a while for her to come up with a subject that captured her attention. During her junior year, she decided to start painting female mixed martial arts fighters, MMA being Ostman's favorite sport, and that is the focus of her work today. The goal of this work is to shift the perception of these women fighters. They are her heroes, and she wants to use her voice as an artist to lift them up and represent them in a positive light for the world to see.

In the future, Ostman wants to display her work in MMA spaces - event centers, gyms, etc. - and she also wants to teach young kids about confidence, self love, and empowerment through practising art.

Paige VanZant, wearing a mask of her own blood, casts her eyes downward after being submitted late in the fifth round by rising star Rose Namajunas. Lina Lansberg focuses her other eye, the one that hasn't swollen shut, onto her opponent, Lucie Pudilova. Leslie Smith, despite the fact that a well-aimed strike from Jessica Eye has just popped her cauliflower ear and blood is now pouring down the side of her face, hunches her shoulders and raises her fists defensively. Unfazed.

Samantha Ostman is a Sioux Falls-based painter. She paints portraits of female mixed martial artists in a visceral, emotional style. Ostman uses her voice as an artist to tell the stories of the women she looks up to as a superfan of mixed martial arts (MMA). The culture surrounding MMA is often unwelcoming to women, and it is her goal is to shift the perception of these women fighters. She makes them into oil paintings, which have a history of portraying royalty and religious figures, as if to say: take us seriously.

The paintings in Ostman's Fight like a Girl series in particular depict female mixed martial artists in the heat of competition. They are battered, they are bloody, but they are focused. Strong. Whether or not the subject is winning her fight is unimportant, as these images are testimony not to her ability to K.O. or submit her opponent, but to her ability to fight 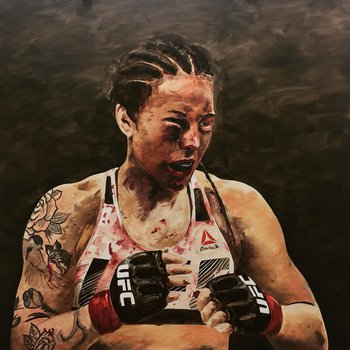 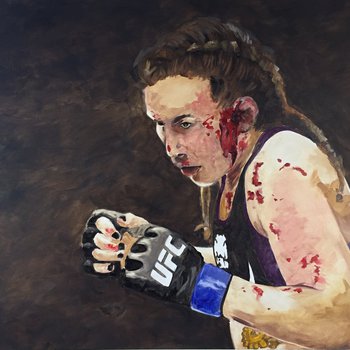 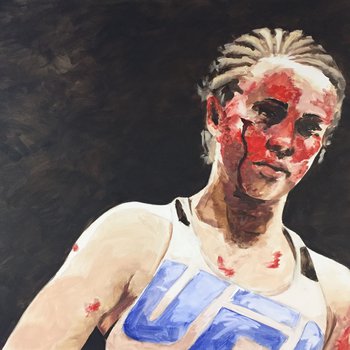